Pearl The Movie DVD.  She was a daredevil who dared to dream.

Mentored by Wiley Post, Pearl's solo flight was at age twelve, and soon become a commercial and stunt pilot before 18.

An amazing video production for the WHOLE family, a wonderful production that brings family and aviation together in one well told story.

You will enjoy the stunning aviation footage while sharing airplanes and the love of flight with young and old alike. The movie tells her amazing life story and helps young and old dream of the skies and to dream of what is possible! It's a must-see for everyone in your family, buy yours today!  Pearl Carter Scott - the Aviatrix.  A member of the Chickasaw Nation, Pearl lived in Marlow, Oklahoma and was born December 9, 1915 in Marlow, Oklahoma.

Her parents George and Lucinda Carter regularly hosted parties and entertained guests during Pearl's childhood from US Congressmen to legislators. One notable visitor was famous aviator Wiley Post. George Carter was intrigued with aircraft and flight, but as a blind individual his dreams of flight here hampered.  George taught his daughter Pearl to drive a car at age 12. This helped him imensely in his business, and Pearl was getting her first training at operating machines. After watching her father receive his first ride with Wiley Post, she was awestruck and forever in love with aviation. Once her father allowed her first flight with Wiley, she went straight to flying lessons with a flight instructor.

She became the youngest pilot in the United States to solo an aircraft. The legendary solo flight took place on September 12, 1928.  Soon after, George Carter had the foresight so purchase an aircraft and build a hangar on their family farm. He chose the amazing Curtiss Robin with the OX-5 engine, same as used in the Curtiss Jenny trainers in WW I. It had a welded frame fuselage with similar design to the Spirit of St Louis flown by Lindbergh. Pearl Carter Scott soon obtained her commercial license in the plane - intitially to assist her father in business travel. Once learning the trade, she flew business bigshots and oil barons to and from business meetings all over the region by age 14.  After getting a taste of boring commercial aviation, she learned to work as a commercial stunt pilot.  She performed for crowds all over the region. Crowds everywhere were stunned by the amazing performance of such a young woman. Her name would forever be connected with aviation.  She even had the opportunity to pilot the family aircraft Winnie Mae.  After Pearl Carter Scott married and had children, she retired from flying and raised her children.

In the 1970's she became an active community member in the Chickasaw Nation.

She was inducted into the Oklahoma Aviation and Space Hall of Fame in 1995.  On her 80th birthday her two grandsons Carter and Bill who are also pilots, setup a flight of a King Air for Pearl to take the controls.

The Turbo Jet King Air treated Pearl Carter Scott to a lovely flight as the pilot in command over the Gulf of Mexico.

Pearl passed away on March 28th, 2005 in Stephens County, Oklahoma at the age of 89. DVD REGION: ALL - Watch anywhere in the world. 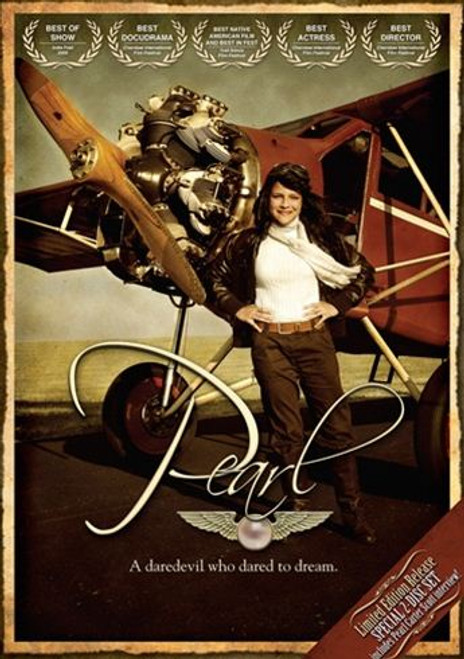